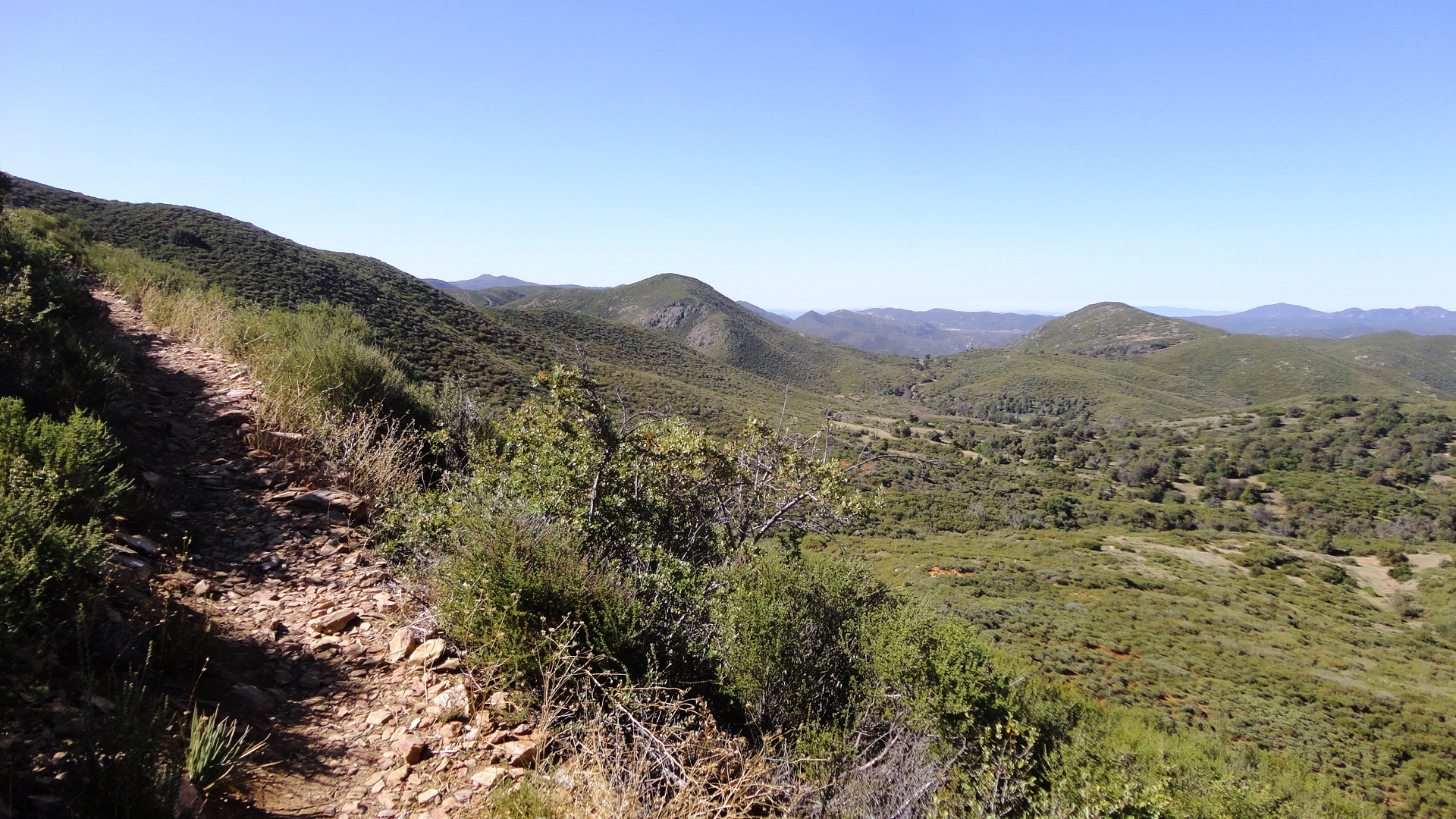 Every time I pull into the parking area at the Noble Canyon trail head in Pine Valley, I get a feeling of peace and adventure.  The peace comes from the natural beauty that surrounds the lot.  The adventure comes from what’s in front of me, especially when riding solo: a lot of pedaling on remote trails and not knowing what is to come.

The ride up to the tree was less strenuous than previous times.  “Hmm?  Is it all the swimming that has made it so?  I don’t know.”

Up at the tree, I stopped to take off my vest, getting back on my bike quickly and continuing on to Indian Creek trail, one of my favorites.  At the hike-a-bike waterfall, I came upon the first person of the day.  He was taking a rest, pleased to hear that someone else had climbed up from Pine Valley, offering that most people like to shuttle so they can “yahoo their way down.”

“Have a good day,” I said, passing by him and continuing the climb to Champagne Pass.

I stopped at Champagne to eat an apple.  For whatever reason, I thought about the fact that I hadn’t yet had my first rattlesnake encounter of the season.  Descending off the pass, that thought continued, going along the lines of something like this:  that Outside Magazine article about the rattlesnake bite in Yosemite was scary, what would I do if that happens, I have my SPOT device, are the batteries good, what about cell phone service out here, keep your eyes on the trail, scan …

And then, ooooohhh shit.

I marveled at how beautiful it was, though wanting it to move on.  Suddenly, to my right, I heard movement.  It was another rattlesnake in the brush.  Two rattlers were within a few feet of me.  Am I near a den?  Look behind me.  Nothing.  To my left, I saw a hole.   Maybe?

Then the one to my right and the one in front of me appeared to be converging behind a rock.  Silence.  I could still see the last 10-12 inches of the one on the trail, knowing that it could turn quick and strike if it wanted to, should I try to pass by.  I waited.  Perhaps 5 minutes passed.

Have you ever heard 2 rattlesnakes race down the side of ravine/hill/mountain?  That quick, they were gone, shadows seemingly lunging through the chaparral.

I got back on my bike and pedaled on, eventually connecting into Noble and then went down.

It wasn’t my best day, technically, with dabs here and there and a few dismounts.  Ugh.  Nevertheless, at the oak forest, I had no cares.

How great that ferns are along the trail too!

From there, the trail goes out into the desert eco-zone, the variety keeping the riding experience fresh.

I took “extra-credit” back to the car, not yet understanding why it is called that.  I mean, it is the Noble Canyon trail.  Why would you not finish it and why would it be extra-credit to ride the trail to its end? Maybe the bail-out should be called: Incomplete.

I was looking forward to the manzanita, knowing that after it, one of the best finishes to a trail was in front of me.

However, I did not have my best game on, as I goofed several sections.  It didn’t matter, though, as I knew there’d be more times when I’d likely run better lines.

Getting back to the car, unscathed, is what mattered most.

0 comments on “Pine Valley to Champagne Pass to Noble Canyon, with a Rattlesnake(s) Crossing”