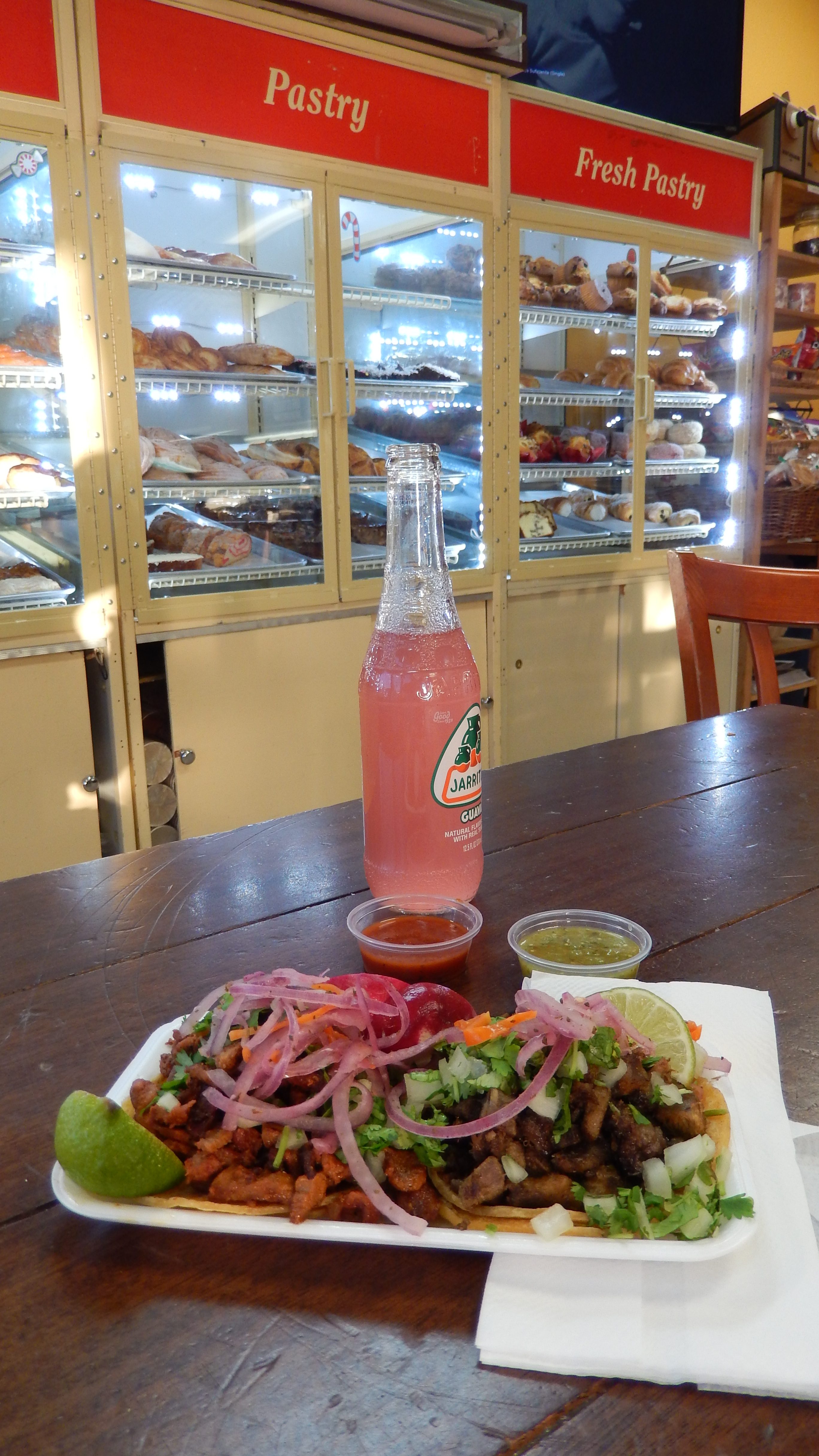 I saw it late one night more than a year ago, returning home from a live music show at a bar: a taco cart with steam rising up in the bright fluorescent light of a small strip mall parking lot. Not hungry, I kept on driving.  I did not forget about it, though.  A few weeks later, I stopped by and quickly learned the process:

Step 1:  take a look at the cart to see what the offerings are for the night.

Step 2:  go inside the Mexican bakery, step up to the register and place your order.

Step 3:  go back outside and hand your ticket to the guy operating the taco cart.

Step 4:  wait a minute or two, chat with the others while doing so.

Step 5:  eat Tijuana-style tacos in the parking lot, or go inside and sit at a table.

It became my go-to place for cheap street tacos.

Then the other week, I noticed that the cart was not there.  I called the bakery and found out that the guy operating it was now making tacos in the back kitchen of the bakery.

“They’re the same tacos,” a woman working that day told me in Spanish over the phone.

A week later, I entered the panadería and quickly placed my order: de lengua was taco number one.  Number two was adobada because the de cabeza, another favorite of mine from the facial area of the steer, was not yet ready for serving.

A handful of minutes later, I was handed a plate of food not unlike what you would find south of here on the streets of Tijuana.  I told him so last time I ate at the cart, to which he smiled and said that he serves the same thing as people there do.  I concurred.

The tacos piled high with delicious meat called for something to drink.  I surveyed the cooler, but then asked if they had any jugos naturales.  Orange juice was the only option, so I went back to the cooler and grabbed a guava soda, flipped off the cap with the bottle opener tied to the cooler with a string, and went back to the table.

“How are your tacos?”  It was the man who made tacos at the cart.

“Great! I was worried that you were no longer making tacos since the cart is gone.”

“We were getting so busy outside.  We had to bring it inside.”

I did not ask any questions, only adding compliments about his food and that I was happy knowing that I could still get tacos close to my house that are as good as on the other side of the wall.

He smiled, thanking me.

Tongue on fire from the salsa, I washed the remainder of the tacos down with the sweet fizz of pink fruity soda.  Looking at the baked goods, I saw apple fritters.  I bought one, thinking of breakfast in the morning.

0 comments on “Street Tacos at the Bakery and Guava Soda”