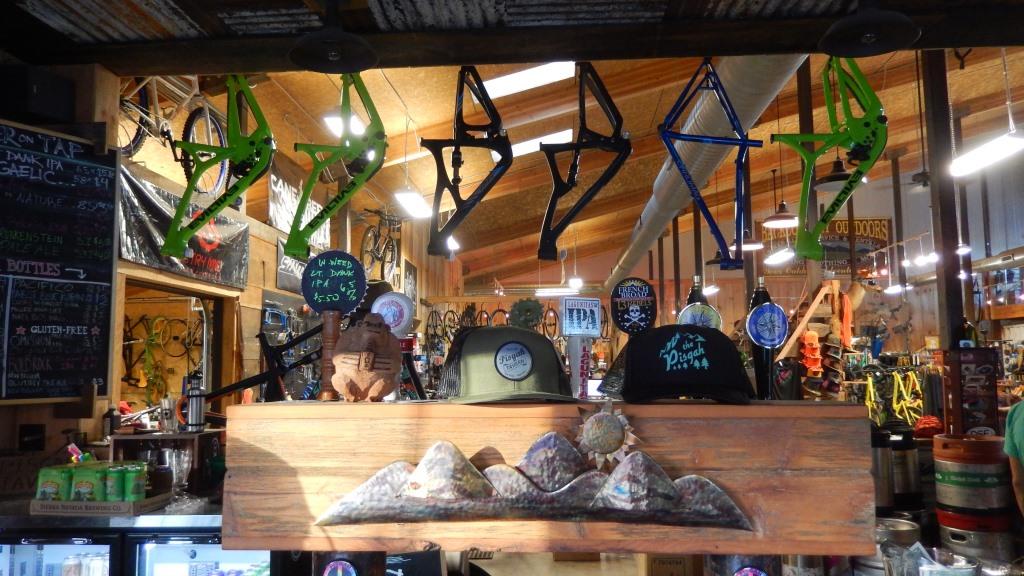 The Pisgah Tavern was resuscitated in 2010 inside of a mountain bike shop called The Hub.  Back then, the bike shop-cum-bar was across the street in a smaller space.  Going back even farther, the tavern name dates back to the 1940s when it was a local watering hole, so to speak.  Today, the bike shop with a bar that is situated on the edge of Pisgah National Forest in North Carolina’s Appalachian Mountains is the same thing, i.e. a watering hole, serving beer to visiting mountain bikers, hikers, passers-through, and locals alike.  It is a welcoming spot, where you can walk around and sip your pint while browsing the store’s offerings, hang out at the bar, or sit on the outdoor patio and watch the day slip away.

“Ride Bikes.  Drink Beer.”  That is the motto there.  With taps of local craft beer and a refrigerated cooler of bottles and cans, including macro brews, mountain bike frames hanging behind the bar, and inspiring action photography hanging on the walls, it is a seamless coming-together of the two.  Turn pedals for several hours on the mountainous trails above town that are littered with rocks and roots and you will have earned a pint or three.

On a perfect autumnal afternoon with trees’ leaves glimmering and shimmering like jewels, I ordered round two for friends sitting out on the patio.  An hour or so earlier, we had come down from up high on Pilot Rock and Slate Rock.  I waited at the bar while the bartender poured four plastic cups full, two each of Asheville’s Wicked Weed Lieutenant Dank and Harrisburg’s Troeg’s Hopknife.  To my right, five bearded guys sitting at the bar varying in age from twenties to fifties were having an insightful conversation.

“You do not smoke cocaine.  You smoke freebase.”  Those words are what stood out and stuck in my memory bank.  I heard them like the nearby crystalline Davidson River water flowing over smooth, rounded rocks.

I looked over to note that it was one of the twenty-somethings providing the lesson to one of the older guys.  A few seconds later, the bartender sat the Danks in front of me.  I delivered them to my friends outside, and then I went back inside to collect the Hopknife ales and to pay the tab.

Relaying the cocaine lesson/message to the group, we had a hearty laugh.

Alcohol, though, was running through our veins and going straight to our heads.  Two of us had nothing to do the next day except drive back home.  The other two of us were planning another ride, this time on the remote Daniel’s Ridge loop with an added out-and-back on Farlow.

Hungry, we decided to go to the grocery store and then back to camp to eat food and drink more beer by the fire.

2 comments on “MTB and Beer: The Hub/Pisgah Tavern in Brevard, NC”