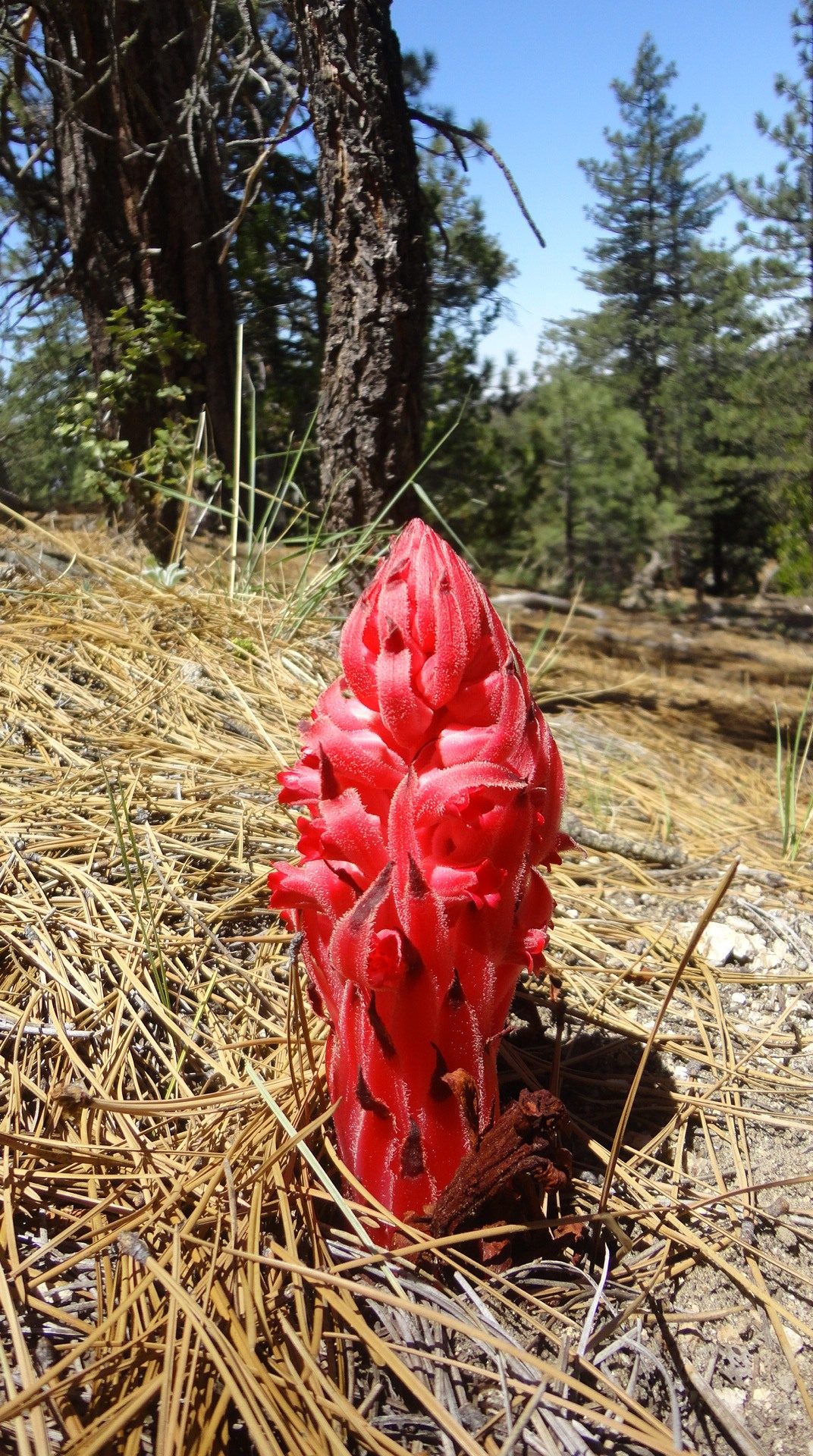 On a weekend hike in the San Jacinto Mountains, I learned of a plant I had never seen before:  Sarcodes sanguinea.  I’m not going to summarize what I read on a USFS webpage, instead copying/pasting it for you to read here.  Photos that I took are below the web info:

“The common name of this plant is considerably less grotesque than its scientific name, given it by John Torrey, a famous New York botanist of the 19th Century. It translates roughly to “the bloody flesh-like thing,” an allusion to the bright red color of the plant – the entire plant, not just the flowers. It belongs to the Monotropaceae, or Indian-pipe family, a family closely related to the Ericaceae, or heath family: snow plant is the unlikely relation of such shrubs as manzanita, madroño, laurel, and azalea.

Snow plant has no chlorophyll; it derives nutrition from fungi underneath the soil, and for this reason the plant is called “mycotrophic”. These fungi are the mycorrhizae (“fungus-roots”) of conifers, an interesting topic by itself. Many conifers (among other plants) require these fungi to live normally. Mycorrhizae are composed of strands of cells (mycelia) that grow about in the soil; these strands are quite numerous and extensive, and the conifer uses them to bring water and minerals to itself. In return, the conifer provides the fungus with some of the products of its photosynthesis. Snow plant takes advantage of this felicitous arrangement by parasitizing the mycorrhizae of the photosynthate provided it by the conifer, which makes sense, given that it is a plant without chlorophyll, and therefore a plant that cannot photosynthesize. In this indirect way, Sarcodes is a parasite of conifers; this is why they are always seen beneath (or very close to) them.

Snow plant is difficult to confuse with other plants, and indeed stands a better chance of being confused with a misplaced piece of meat. It will be found growing out of pine needles and other forest litter on the surface of the ground, near a conifer. The aboveground portion begins to grow in late spring, as the snow melts, and presents a dramatic contrast with the snow (if the surrounding snow has not already melted, as is typical). The aboveground portion is merely the stalk of the inflorescence, the ‘vegetative’ part of the plant being little more than a thick parasitic root. It achieves about a foot or so in height. The flowers appear closely packed together, yet evenly spaced. It is through them that snow plant’s relationship with ericaceous plants can be discovered: the flower (red, of course) has five petals, mostly fused along their edges into the shape of an elongated bell. ”

0 comments on “The Snow Plant”