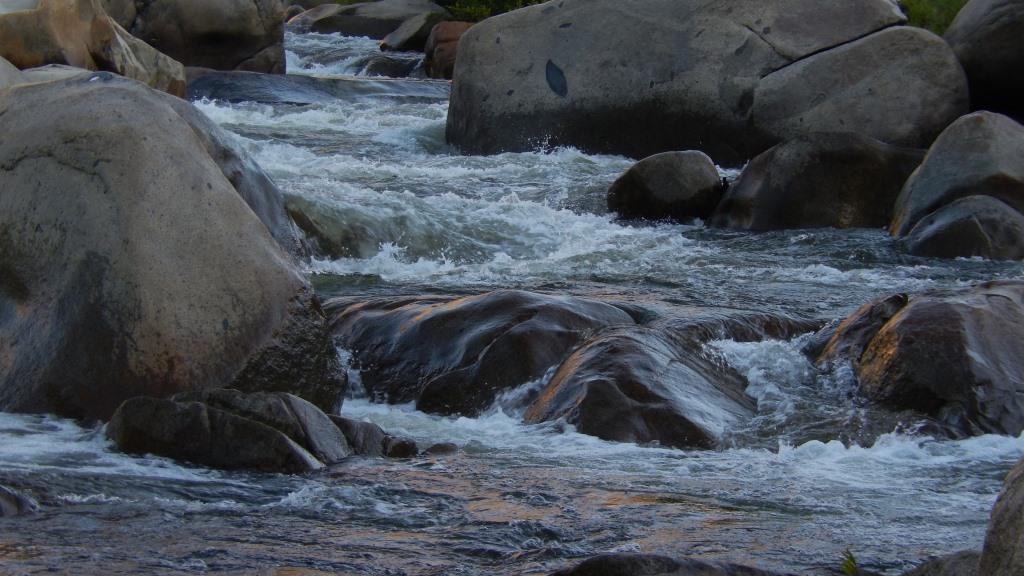 Shuttle Bob was booked for the weekend, meaning that, for me, it was going to be three days of out-and-backs and loop riding in Kernville.  “I’m booked all weekend, man,” he said.  “No problem, Bob.  I can do rides without a shuttle.  I just want to ride in the Sierra and camp along the river.”

While most riders come into town to ride the famous Cannell and Just Outstanding (JO) trails as shuttle rides, there is plenty of opportunity for mountain biking sans shuttle in the Sequoia National Forest of the southern Sierra Nevada Mountains of California.   One caveat though:  you have to like climbing.

I pull into Chico Flat, quickly get out my tent and sleeping bag and walk with a little skip in my step down to the Kern River.  A rock grotto composed of giant boulders with a spit of sand sitting in the middle is a perfect, secluded campsite.  The front door view is of whitewater, the Kern pumping due to snowmelt and recent rains.  Tent set up, and bag unfurled, I walk back up to my car and get in, making way up the road to McNally’s.

There is enough light in the sky for two hours of out-and-back riding on Whiskey Flat.  Unknowing if it has been brushed recently, I go anyway, simply wanting to put some spin in my legs after near five hours of driving.

Once up high and looking down on the river, with rugged and raw mountain vistas as a backdrop, I am reminded of why I keep coming back to Kernville:  natural beauty.  Then suddenly, out of seemingly nowhere, a fighter jet comes screaming up through the river valley.  Having lived in nearby Ridgecrest for a year, I suspect it is from China Lake.

“What the hell? Why are they flying here?” Thoughts rumble around my head like rocks getting tossed and turned in the river’s rapids.

Then another one rips through, turning sideways as it slices up to the high country.   I immediately think of how there has been talk of establishing new wilderness areas in this little corner of the country.

How does noise impact fit into that equation?  Is it wilderness when fighter jets roar through, so loud that I have to plug my ears as the second one races by in what felt like I could reach out and touch it from my vantage point on the trail?   What about the birds?  The mountain lions?  The black bear?  They can’t plug their ears. Too, I think of Gordon Hempton and his One Square Inch of Silence efforts.

My natural beauty moment is wrecked in that moment.  Nevertheless, I pedal on into the waning sunlight.  Looking east, I see Salmon Creek Falls on the distant high ridge line as it drops down the rock face.  Natural beauty is restored.   A mile or more of pedaling south after seeing the falls, I then turn around and head back to my car.  The trail is unkempt in places, but I kind of like that; sometimes too much sanitizing takes away a trail’s natural character.

I wake up the next morning knowing it is going to be a big day.  Oatmeal cooked on the camp stove is riverside breakfast.  Coffee peps my blood.

Driving up to Greenhorn Summit, the number of dead/dying trees is more pronounced than I remember from two years ago.  The rusty red trees that should be green are a sign of beetle devastation. It saddens me.  The forest looks very sick.

I park by the Unal trailhead at the forest district station, taking my bike off the rack in the cool morning air.  Up to JO I go, first, making a loop out of the top section, which does not allow me to experience the manzanita tunnels.    Still, curving through forest on the top of JO and climbing back on the forest road is a great way to start the day:  fun, smiles, not strenuous.

Back at the Unal trailhead, which is at the summit station, I stop and talk with a forester.  I ask about the red trees.  The news is terrible.  Recent analysis of aerial photography suggests that upwards of 15 million trees from Tahoe down to Kernville are dead or are going to die.   He says that it equates to 60% of the forest.

Why?  Drought/beetle combo.  In my own words, meaning my understanding of his explanation, I learn that the drought causes the trees to not be able to put as much sap, or maybe none at all, up top in the trees.  That this lack of sap flow is caused, in part, to beetles that are able to bore into the bark.  That lack of sap, also, makes it easier for the beetles to set up home and deposit larvae.  They are bark beetles.  They are a native species.  Right now, the conditions are perfect for their propagation.  Recent warm winters haven not killed off as many beetles, like a deep freeze normally does in the Sierra.

I ask myself: How wild is wilderness when what we do at home impacts it?  I ride Unal Trail after JO, both of which are simply trails meandering through trees, some green and some now brown/red, and do not see any other humans.  I think of the current debate about bikes in wilderness.  Are more people in the forest, more people who see what is happening in the Sierra Nevada, needed to assist in, maybe, saving it?  Exclusion only leads to fewer witnesses, right?  More witnesses lead to more understanding through first-hand experience, which likely elicits more action, I tell myself.

What’s more, riding a mountain bike on trails with dead trees all around spoke to me of a disconnect in thinking that we can set up wilderness areas and that things will be, perhaps, truly or authentically or whatever … “wild.”  Is it enough to establish wilderness on paper, knowing that how we heat and cool our homes, how we arrive at the trailhead, contributes to the death of that wilderness?  After the trees go, what next?

Would increasing access, though regulated, lead to greater support and more calls for an increase in the appropriation of funds to conduct more scientific research so that we may better understand, and possibly improve, how we manage forests? Wilderness?

Up on Unal, looking north at a spectacular view of jagged, snowcapped peaks, aka Sierra Nevada, such thoughts float around my mind.  I think, also, of a few minutes prior on the trail when I stopped to check out some morteros; human-made depressions in the rock for grinding food.

Human impact?  How do we as a nation, shaped by historically Euro-centric political views on the natural world, define wilderness?  How do native peoples define it?

Moving on, and interjecting with a short note: If 12 o’clock is the northern terminus/trailhead for Unal trail, which is a loop, then riding counter-clockwise from 6-to-12 is an absolute blast of a finish.  No doubt, the counter-clockwise 12-to-6 part of Unal is a grunt of climb, but the sweet reward on the latter half is well worth it.

Not done, I eat an apple with almond butter and suck down some electrolytes at my car after finishing up on Unal.  I then cross over the hard road to begin my ascent to the top of Portuguese Pass.  An hour later, and after seeing Shuttle Bob come back down from dropping off some riders up top, I know I am done with sustained climbing for the day.  My legs are tired, which lead me to not do the bonus out-and-back going north from Portuguese Pass.  I turn onto Portuguese and enjoy every foot of trail all the way to the end, except for that one ass-kicker uphill after the road crossing that comes after such glorious downhill riding.  Admittedly, I hike-a-biked that thing, thinking, a re-route is needed.  Lots more brown/red trees are present.

Spent and hungry, I order a burger at the brewery, already thinking of tomorrow’s ride up in the sequoias.  The hops wash away the stiffness and soreness.  Sleep comes easy several hours later.

6 comments on “Kernville: MTB Amidst a Dying Forest and Fighter Jets”